Bible Analyzer is the only free or low cost Bible software to offer this timeless title. This complete lexicon is not to be confused with Thayer's Greek Definitions (also in the bundle) which is a heavy and subjective abridgment of Thayer's full Lexicon. This is the "real deal."

The Thayer's Unabridged Lexicon provides fuller and more comprehensive entries for each Greek word than Strong's or Thayer Definitions. 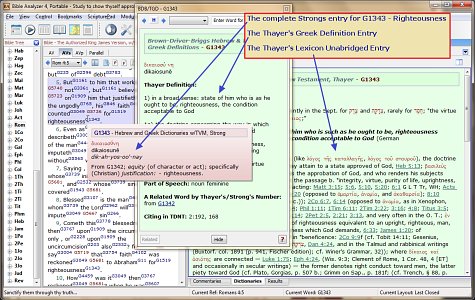 The Strong's Dictionaries with AV usage database allow the AV/Strong's Indexer to function within Bible Analyzer. With the Indexer one can enter an English word and view every original language word and its definition the word is translated from plus access every occurance of the word in the AV!

The (reduced) image below shows the word glory entered. The Indexer found 23 different Hebrew and Greek words, with their definitions and usage, that are translated as glory. Also, a preview will display when the cursor is placed over a Bible reference or Strong's Number as seen below! 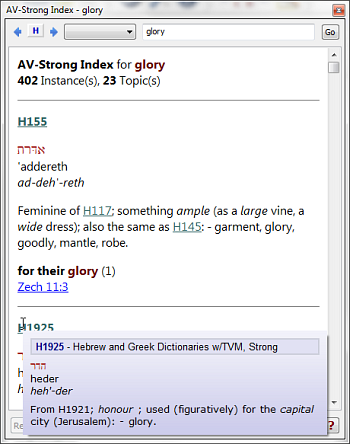 Get All Nine Study Titles
Only $8