The Henry Morris Study Bible is "an invaluable tool for the defense of the Christian faith" according to Dr. John MacArthur. With over 10,000 study notes, 16,000 cross-references, plus 21 appendices, no other resource offers the comprehensive analysis of biblical creation and authority of Scripture.

The written Word of God is under attack in our culture like never before. The annotations of this King James Version based of the Study Bible will:


The HMSB is a treasure house for the biblical creationist and apologist. With around 500 comprehensive notes on the book of Genesis alone, Dr. Morris's scientific insight is just a click away with our Bible Analyzer module. Here is a sample image of what Dr. Morris says about the creation of light in , 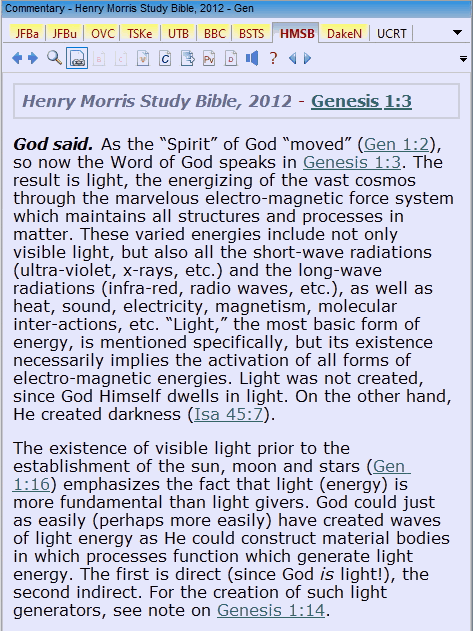 Besides the nearly 10,000 study notes found throughout this title, there are 22 valuable appendices and 8 full color maps included as a Bible Analyzer Book module. The appendices themselves are worth the price. The titles include,


There is arguably no better or more thorough study Bible resource available that deals with the scientific aspects of the Scriptures, however, Dr. Morris does not deal with only the scientific aspects of the Scriptures, he also deals very much with doctrine. His conservative, pre-millennial approach to the text is manifest throughout his comments.
(An earlier edition of this title was called The Defender's Study Bible. The HMSB is the most recent edition)

Dr. Henry Morris is known as the father of modern Creation science, the founder of Institute for Creation Research (ICR) and the author of many well-known apologetic books. His thriving legacy continues to equip Christians to be able to defend the accuracy and authority of Scripture today.

This is a Digital Bible Analyzer Module
Not a Printed Book