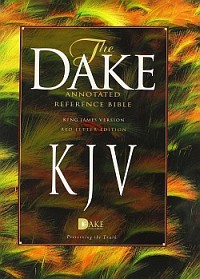 Many years ago we aquired a Dake Reference Bible and we are still amazed at the amount of material Finis J. Dake put into it. Although I don't agree with some of Dake's doctrine, his Bible is full of countless notes, topics, and lists of Bible data that are very helpful. Dake spent more than 20 years of research, over 100,000 hours, in compiling this reference Bible which includes over 35,000 commentary notes which contain over 500,000 cross-references.

One of the most valuable features are the 1000s of lists Dake has compiled. He developed lists of material we have not seen anywhere else. Here is a small section of titles of his lists of seven things,

There are over 5800 lists and topics that can be easily filtered by an entered string.

The publisher says about Dake's Bible,

Thousands of passages are amplified. Obscure readings are made clear. Ancient customs are explained, along with matters of history, culture and geography. Greek and Hebrew words and idioms are handled. In addition, parables, types, symbols, allegories and figures of speech are dealt with. Dispensational issues are treated in a systematic fashion, along with hundreds of details of biblical prophecy.

With our Bible Analyzer edition of the Dake Bible you get even more data than in the printed edition. Such as,

Note:
Finis J.Dake was a Pentecostal/Charismatic minister who was not without controversy. He held a few doctrines that are not considered "orthodox" by many today. As with any other resource, Dake's material must be read with a discerning eye. We believe there is much that can be gained from his material in spite of these issues. As with any commentary or reference work one must "feed on the clover and spit out the thornes."

Along with the Notes and Topics, included in this bundle is Dake's large and detailed chart, "The Plan of the Ages." This full-color chart is patterned after Clarence Larkin's charts and also has mapped hotspots over the Scripture references. This huge chart is nearly 5000 pixels wide and is viewable in the Bible Analyzer Image viewer.

We have made about a 5 minute video demonstrating some of the features of the Dake material. You can view it below,