Exposition of the Whole Bible, Morgan

G. Campbell Morgan (1863-1945) was born the son of a Baptist minister on December 9, 1863. The ten year old boy was inspired by D. L. Moody who had reached out to England for the first time. Moody and Morgan’s parents made a great impact on his early faith. After his first preaching experience at Monmouth Methodist Church at age thirteen on Sunday, August 27, 1876, he regularly preached as a “boy preacher” in country chapels on Sundays and holidays.

Campbell Morgan visited the United States for the first time in 1896 at the invitation of D. L. Moody, who asked him to lecture to the students at the Moody Bible Institute. This was the first of his 54 crossings of the Atlantic to preach and teach. He died in 1945.

Morgan became a prolific author, writing on nearly every book of the Bible. The Bible Analyzer commentary we offer this month was compiled from Morgan's written expositions. For most chapters of the Bible the comments are a few paragraphs of overview derived from his many expositional messages. However, for the four gospels and book of Acts the comments are much more extensive and detailed.

Get Morgan's Expositional commentary today for Only $3 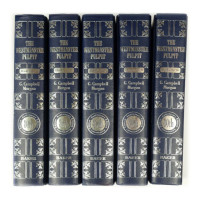